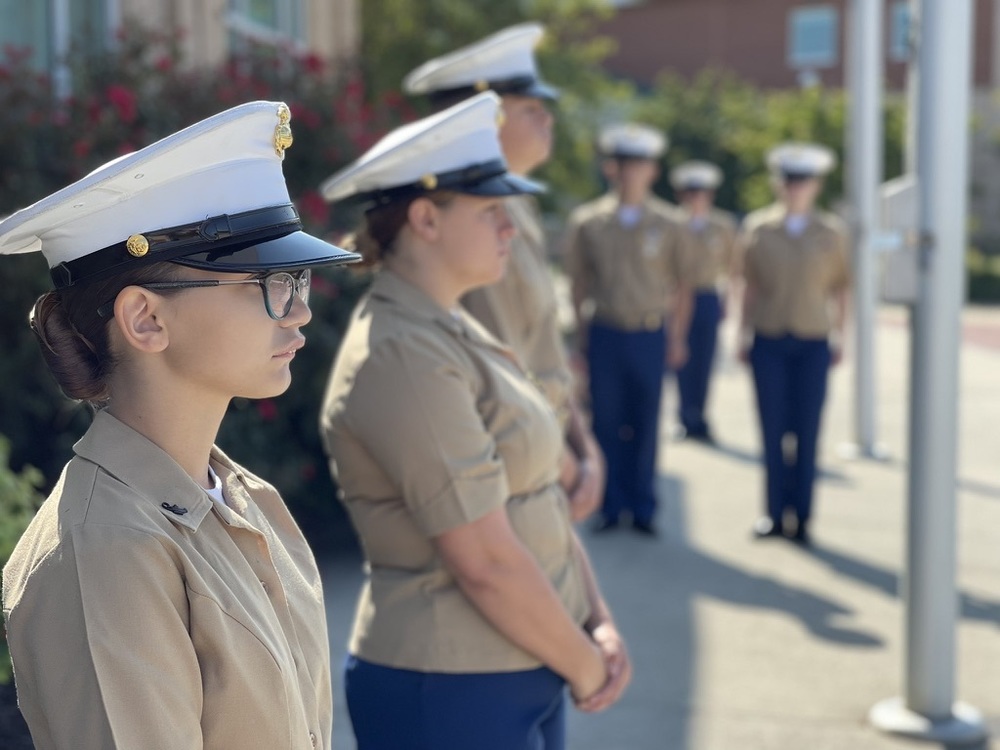 Marine Corps JROTC Program is for All Students Interested in Leadership

When Tiffani Burdick enrolled in the Marine Corps Junior ROTC (MCJROTC) program as a high school freshman, she didn’t realize how impactful the program would be to the rest of her life. Now a student at the University of Virginia, Tiffani says she’s not sure where she would be without MCJROTC.

“I learned many things in my MCJROTC courses,” Burdick said. “The two that stick out the most to me are confidence in myself and my abilities and leadership exposure that I could never have received from any other high school program.”

Currently, 76 eighth through twelfth-grade GCPS students are enrolled in MCJROTC, and USMC Lt. Colonel (Ret.) Kevin A. Williams, Senior Marine Instructor, wants to encourage other students to take a look at the division’s program. “One misconception is that our cadets are in the program to go into the military,” Williams said. “Unlike a typical CTE program where people are interested in being, for example, a heavy equipment operator after graduation, very few of our students will go into the military. And that's perfectly okay with us.

“We don't recruit for the military. Our congressionally mandated mission is to provide a citizenship program to help young people understand a little bit better about citizenship and about leadership,” he said.

Williams is working toward his master’s degree in education supervision and leadership and says that some of the things that he learned this semester are what he teaches his students. “They use some different terminology, but it's the same,” he said. “So, you can wait to be a master’s student and pay hundreds of thousands of dollars, or we can teach it to you now for free in the tenth grade. Everybody can benefit from learning about leadership,” Williams said.

There are no pre-requisites for enrollment – beyond a positive attitude. “We want them to be able to physically perform some of the things that we do part as of our curriculum, but if they have that positive attitude and that motivation to be here, we'll work with them,” Williams said.

Female students are also encouraged to enroll. “Young women tend to do very well in this program,” Williams said. Staff Sergeant Dan Strong’s daughter is currently a sophomore and has been in the program for two years. “What she loves about it is that it puts her on a level playing field with the guys. MCJROTC does a really wonderful thing of teaching young men and young women that they can work well together. MCJROTC puts them in situations where it challenges them to take each other seriously,” Strong said. “We also have a competitive marksmanship team, and the ladies tend to do very well in marksmanship,” Williams said.

While recruiting for the military isn’t part of the program’s mandate, Williams and Strong both said they would do whatever they could to help a student interested in the military as a career. Burdick said she developed her love of the Marine Corps through her participation in the program. “Because of this, I applied for an NROTC (Marine Option) scholarship and earned it, and my degree at UVA will be in elementary education. Upon graduation, I will be commissioned into the Marine Corps as a 2nd Lieutenant,” she said. The scholarship Burdick earned pays for her tuition and pays her a stipend to cover some of her other expenses. She has excelled at UVA and is currently in a significant leadership billet within her battalion. “I loved my experiences in GCPS even beyond my MCJROTC experiences,” she said. “I love that Goochland County has teachers that become invested in their students’ lives, even beyond their high school years.”

Students are required to wear a uniform but only once a week. And prospective students shouldn’t be intimidated by the two Marines running the program. MCJROTC isn’t like the stereotypical boot camp experience. “Yelling and all of that, we don't do that here,” Williams said. “We want to help students to become successful in whatever it is that they want to do after high school, and we really would like to have an opportunity to help more young people become better adults for the future of the country.”